Witnessing the Impact of Our Work

While visiting one of our local assisted living communities, Guardian Jacksonville Account Manager Jerry Talarico received a compliment from a resident for wearing a necktie. The resident began to chat with Jerry, sharing stories about his past, the 10 years he spent in the military, and a time when he owned a company in Baltimore that sent food to children in west Africa through a special program.

After talking for about 10 minutes, the resident went to his room and returned with a necktie. He explained that the tie was given to him at a military ceremony and then graciously offered it to Jerry as a gift. Even though Jerry refused, the resident insisted he take it, explaining he will never wear it and does not know anyone who would since he does not see many people wearing neckties anymore. At the end of their conversation, the resident thanked Jerry for everything our pharmacy does to ensure medications reach clients safely and promptly.

Our team works hard each day to ensure residents receive medications on time, easing any worries they may have about having access to their critical prescriptions. Receiving positive feedback directly from the recipients of our services ignites a sense of pride and boosts morale for our hardworking team. 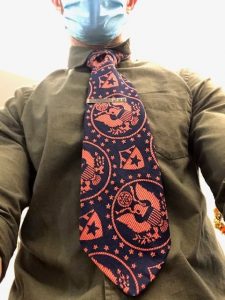 Substance Use Disorder in Senior Living: 5 Strategies to Empower Staff to Care for Residents at Risk
December 27, 2022

How LTC Pharmacies Can Be a Crucial Safety Net for Assisted Living Communities
April 5, 2022

How Long-Term Care Communities Can Preserve Medication Access for Residents During a Natural Disaster Evacuation
October 25, 2021
Go to Top