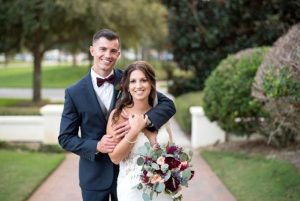 It all began when two of our aspiring team members, Alex and Jerry, started studying together. Their study dates soon sparked a romance which they managed to keep quiet from most of their colleagues – for almost four years! They agreed to keep it secret to minimize workplace distractions while both pursued advanced opportunities at Guardian Pharmacy of Jacksonville.

Alex and Jerry began their careers at Guardian as fulfillment technicians, however, their careers diverged from there. Alex, who was hired in 2011, advanced into data entry and became the department supervisor for several years. Now, Alex functions as Operations Manager overseeing both fulfillment and data entry departments. Jerry, who started his career at Guardian in 2013, took the initiative to interview for a newly created position in 2014. After successfully interviewing, Jerry was promoted to our Client Service and Relations Manager.

When they announced their engagement in July 2017, their Guardian family was both surprised and happy! Happy tears were shed by none other than Guardian Jacksonville’s president, Khristy McClelland. In October 2018, this wonderful couple was married during a perfect afternoon wedding and enjoyed a romantic honeymoon in Italy and London. Both Jerry and Alex are huge Jaguar fans, so their honeymoon adventure also included attending the Jags-Eagles game in London.

We are so excited for Alex and Jerry and wish them a lifetime of happiness! As Alex puts it best, “Guardian means a lot to us. Not only has it given us both a career, it has given us a future together, too.”

Substance Use Disorder in Senior Living: 5 Strategies to Empower Staff to Care for Residents at Risk
December 27, 2022

How LTC Pharmacies Can Be a Crucial Safety Net for Assisted Living Communities
April 5, 2022

How Long-Term Care Communities Can Preserve Medication Access for Residents During a Natural Disaster Evacuation
October 25, 2021
Go to Top